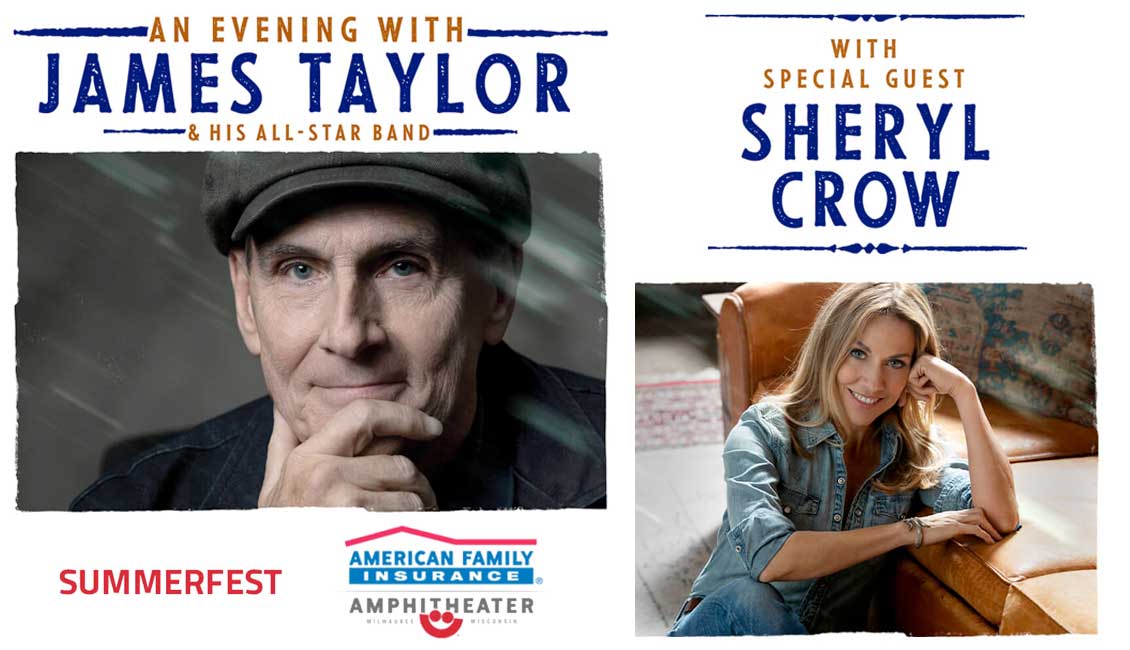 Summerfest organisers are excited to announce that JAMES TAYLOR AND HIS ALL-STAR BAND with special guest SHERYL CROW will headline the American Family Insurance Amphitheater during Summerfest on Saturday 24th June 2023.

JAMES TAYLOR’S music embodies the art of songwriting in its most personal and universal forms. He is a master at describing specific, even autobiographical situations, in a way that resonates with people everywhere. In 1971, Taylor was on the cover of Time magazine, heralded as the harbinger of the singer-songwriter era. Five decades later, his warm baritone, introspective lyrics and unique style of guitar playing still blaze a path to which young musicians aspire.

Taylor has sold more than 100 million albums, earning gold, platinum and multi-platinum awards since the release of his self-titled debut album in 1968. He has won multiple GRAMMY Awards, has been inducted into both the Rock and Roll and the prestigious Songwriters Halls of Fame and was honoured by The National Academy of Recording Arts and Sciences as a MUSICARES Person of the Year.

Nine-time GRAMMY AWARD recipient SHERYL CROW is an American music icon. Her first nine studio albums have sold 35 million copies worldwide; seven of them charted in the Top 10 and five were certified for Multi-Platinum sales. In addition to such No. 1 hits as “All I Wanna Do,” “Soak Up the Sun” and “The First Cut Is the Deepest,” Crow has lofted 40 singles into the Billboard Hot 100, Adult Top 40, Adult Contemporary, Mainstream Top 40 and Hot Country Songs charts, with more No. 1 Triple A singles than any other female artist. SHERYL CROW has been feted by a new generation of singer songwriters who have covered her work and talked about her influence including Phoebe Bridgers, Haim, Maren Morris and Best Coast.