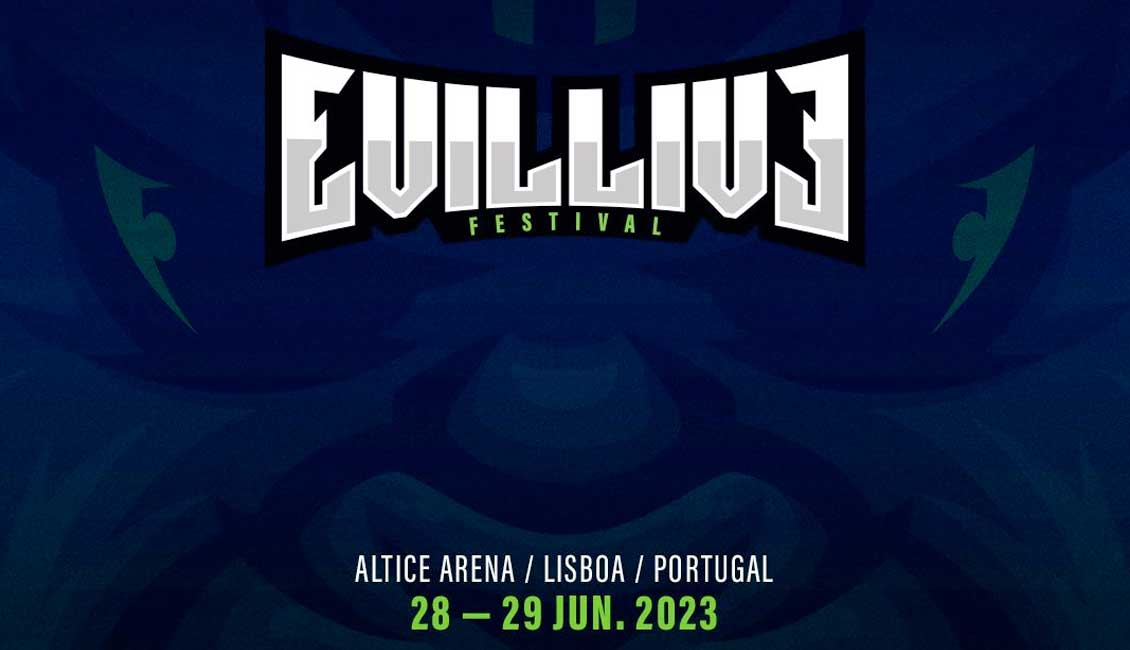 On the 28th and 29th of June 2023, EVIL LIVE FESTIVAL takes to the Altice Arena, in Lisbon, a multi-genre lineup within heavy music, including headliners PANTERA and SLIPKNOT.

Next year marks the debut of a new festival dedicated to heavier sounds – in all its aspects. With a commitment to the diversity of genres and subgenres as its backbone, EVIL LIVE FESTIVAL presents an inaugural edition with proposals ranging from mainstream to alternative, from riffs and guitars to new, more contemporary trends, from established big names to emerging talent. The first edition of the event takes place on the 28th and 29th of June 2023, at the Altice Arena, in Lisbon, with the presence of the returning living legends PANTERA and the ever-explosive SLIPKNOT as headliners.

The first night of the EVIL LIVE FESTIVAL, on the 28th of June, promises to remain in the books, with the return of the giants PANTERA to Portugal. Supported by a lineup full of classics, the group – whose line-up comprises Phil Anselmo on vocals, Rex Brown on bass, Zakk Wylde on guitar and Charlie Benante on drums – will provide a unique opportunity to witness live the strength of the riffs and the groove of unavoidable themes from the history of metal, such as «Cowboys From Hell», «A New Level» or «Walk», with the latter already having more than 200 million streams on Spotify alone. The numbers are not surprising. PANTERA are universally considered to be one of the greatest metal bands of all time. The quartet originally created by brothers “Dimebag” Darrell and “Vinnie” Paul Abbott quickly achieved massive global success in the 1990s, with multiple gold and platinum albums, sold-out tours, ferocious live performances, and four Grammy nominations. ®. To this day, the records they recorded remain cornerstones of heavy music, including “Cowboys From Hell”, “Vulgar Display Of Power” and the Billboard #1 “Far Beyond Driven”. In the new millennium, the Texas quartet continues to inspire multitudes of musicians and millions of incredibly dedicated fans around the world.

The second night of the EVIL LIVE FESTIVAL, on the 29th of June, suggests yet another performance to stay in the memory on the part of SLIPKNOT, with the Iowa giants bringing to our country for the first time the themes of their most recent album, «The End, So Far». Led by Corey Taylor, SLIPKNOT is one of the most iconic and successful names in the metal wave that, during the second half of the 90s, took the heavy music scene by storm. Emerged at the end of the century. From the 20th century onwards from Des Moines, the masked nine quickly established themselves as one of the most enigmatic and provocative propositions of the modern era of extreme music. Over the past two decades they have grown, becoming a true worldwide phenomenon of popularity and going beyond any strict labels. Along the way, they have been nominated for ten Grammy Awards (winning the award in 2006 with «Before I Forget»), have collected 13 platinum and 44 gold discs and have more than 3 billion views on YouTube to date.

After revealing the headliners of the inaugural edition of EVIL LIVE FESTIVAL, organisers now announce the presence of five more important names in a luxury cast that, during the 28th and 29th of June 2023, will transform the Altice Arena, in Lisbon into an obligatory stop for all music lovers in the universe of heavier music – in all its aspects. ALTER BRIDGE and VENDED thus join PANTERA in the lineup on the first day of the event, June 28th, with MESHUGGAH, FEVER 333 and NOTHING MORE taking the stage on the second day of concerts, June 29th, headlined by SLIPKNOT.

Commanded by the powerful riffs of Mark Tremonti and the voice of Myles Kennedy, the North Americans ALTER BRIDGE already have more than a decade of solid career. A constant path, supported by songs built from riffs and strong vocalizations, based on ear hooks, which earned them enormous success on a global scale. Recording top scores in magazines like Total Guitar and KERRANG!, sold-out tours both in the US and Europe, appearances on VH1 and even on the cover of the influential Classic Rock, it’s exactly on this successfully tested formula that musicians have based their creative output. The group’s most recent album, «Pawns & Kings», was released on 14 October.

Created in the late 80’s, MESHUGGAH are one of the most acclaimed bands of the last three decades in the world of heavy music and seen as precursors of the djent phenomenon. Offering a complex form of metal that combines mathematical and cerebral arrangements, the elusive rhythms of the most experimental jazz, syncopated polyrhythms, tonal dissonance, chromatic harmonies and a dose of swing as impressive as it is devastating, Umeå’s band has a dozen quality albums undeniable in its back catalogue, among which are titles as unavoidable and influential as «Destroy, Erase, Improve», «Chaosphere», «Nothing», «Catch Thirtytree» or «Obzen», which was even the target of a nomination for a Swedish Grammy.

Hailing from Los Angeles, Calif., trio FEVER 333 inject their rap and rock hybrid with politically charged lyrics that invoke the defiant heritage of pioneers Black Flag, Public Enemy and Rage Against The Machine. Abrasive, aggressive and energetic, the band quickly established a reputation with fiery performances and, in 2019, received a Grammy nomination for “Best Rock Performance” with the explosive title theme of the debut EP «Made In America». Led by frontman Jason Aalon Butler, and supported by producers Travis Barker and John Feldmann, they gave their first shows in 2017 and, backed by a socially conscious message of “community, help and change”, sparked a buzz with the explosive singles “Hunting Season” , «Walking In My Shoes» and «We’re Coming In». In March 2018, they signed a contract with the influential Roadrunner Records, which released «Made In America» later that year. «Strength In Numb333rs», the first full-length, arrived in early 2019, being succeeded by the politically charged single «Presence Is Strength».

Self-described as “five musicians from Des Moines, Iowa, in search of world domination”, VENDED was created in February 2018 and is currently composed of Cole Espeland and Connor Grodzicki on guitars, Griffin Taylor on vocals, Simon Crahan on drums and Jeremiah Pugh on bass. After two years of commitment and hard work, they played a first sold-out show at the Vaudville Mews on March 8th 2020, but just days later, the worldwide COVID-19 shutdown forced them into an unplanned long hiatus. They finally returned to the load in November 2020, with their first appearance at Knotfest, and the young musicians were stronger and hungrier than ever, embarking on a very successful European tour. Their debut EP «What Is It / Kill It», which was released on November 12th, was produced by Griffin Landa of The Acacia Strain.

Texans NOTHING MORE bet on a powerful mix of sinuous progressive rock, explosive metal and sticky alternative rock, ready to be played on the radio. Following in the footsteps of the likes of System of a Down, 30 Seconds To Mars, Incubus, The Mars Volta and Killswitch Engage, the group initially created by longtime friends Jonny Hawkins, Daniel Oliver, Mark Vollelunga and Paul O’Brien spent years perfect your sound by adopting a strict D.I.Y. and making your musis independently. In 2013, they signed with Eleven Seven Music Group and released their fourth LP, “Nothing More”, which proved to be a breakthrough release for the veteran band, introducing them to a much wider audience. The following album, «The Stories We Tell Ourselves», released in 2017, earned them nominations in the categories of “Best Rock Performance”, “Best Rock Theme” and “Best Rock Album” at the Grammys, and quickly became their biggest success to date. In early 2022, they released the single «Spirits», the title theme of the group’s sixth album, which was released at the end of the summer.